“OH, I’M SO SORRY!”
How not to  respond to a divorce announcement.

I was at a party with some old friends the other evening.  One of the guests announced she was getting divorced.  A couple of people in the group said, “Oh, I’m so sorry.”  “Don’t be sorry,” the woman said with a smile.  “I actually feel a lot better now that it’s all over.”

It got me thinking about whether saying you’re sorry is an appropriate response when someone says they’re getting divorced.  Or is it one of those reflexive comments that belongs to times past when divorce was whispered about and carried with it a sense of shame and failure.  Today we’re much more enlightened, knowing that divorce is sometimes the best way to move forward.  People are no longer shackled in dead or miserable marriages like they used to be.   It’s now okay to divorce.  And it’s okay to mark the occasion with a Divorce Party, an occasion that is now firmly embedded in our culture.  Divorce Parties celebrate the end of a difficult unhappy time.  And they celebrate the beginning of a whole new chapter of life.   Party guests show love and support openly and without shame.  The old “I’m sorry” comments are thankfully gone forever.

RING SMASHING CEREMONIES - ON THE RISE IN JAPAN!

A growing trend for divorcing people in Japan is to have a ring-smashing ceremony.  Ring smashing is just that - smashing the ring with a huge hammer.  This is a very specific type of divorce ceremony that is interesting in that Japanese people are often known to be emotionally restrained and the smashing of the wedding rings is.....downright vivid.

There are several companies that have sprung up to provide this intriguing service.  The smashing ceremony itself can be done anywhere the couple chooses, in a restaurant, a specially appointed room, or even in a religious place. The husband and wife who are to be divorced generally arrive at the scene separately. While some couples prefer to do it all alone, others invite guests, sometimes just one or two friends or family members.  Others invite a large number of attendees.

It's interesting how divorce ceremonies have spread worldwide and fascinating to see how particular cultures handle matters.  The common theme is having an event to mark a big life change, providing the ritual we humans badly need!
at August 21, 2017 2 comments: 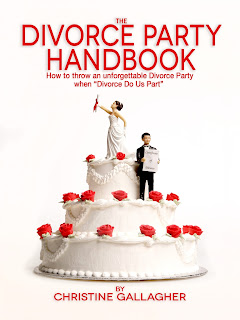 Why Do Women Throw More Divorce Parties Than Men?

WHY DO WOMEN THOW MORE DIVORCE PARTIES THAN MEN?

It’s true that a lot more women throw divorce parties than men, though there are exceptions to that generalization.  When men do have an event, it’s usually casual like drinks or a barbecue or it may involve a getaway trip to somewhere like Las Vegas.  Why is a divorcing woman more likely to have a divorce party than a man?  I think it’s for some of the same reasons that women typically put more time and energy into their friendships than men do.  Women support each other.  Women like to communicate with each other and love delving into feelings more than men typically do (again, a generalization).  Women also tend to take care of each other when one is in trouble.  The divorce party is a natural outgrowth of that nurturing animal comfort women provide for each other.  Women know how hard a breakup can be.  And they are often more than ready to offer a hand to their divorcing friend and help her through the transition to a new phase of life.

Check out these links to my recent interview with Tara Eisenhard, Divorce Coach, Mediator and author.  We share lots of common ideas about t...

Divorce Party Book Author
Christine Gallagher is the #1 expert on Divorce Parties and the author of THE DIVORCE PARTY HANDBOOK (Amazon). She launched the Divorce Party trend back in 2003. It all began when she threw a party for a close friend who’d had a devastating breakup. With close friends and family in attendance, the party was part therapy, part bacchanalia. It was so successful in helping the pal through the worst time of her life that Christine wrote her first “how to” Divorce Party planning manual. Christine has since appeared on television shows in both the U.S. and the U.K. including The Today Show, Britain’s #1 Breakfast Show “GMTV”, The Ricki Lake Show”, NBC News (San Francisco), ITV’s “First Wives” and London Weekend's “Weddings From Hell”. She has been interviewed on hundreds of radio stations worldwide and her books have been featured in major newspapers and magazines.